This article originally appeared on WDBJ7 on October 17, 2022. Read and view the video on the WDJ7 website here. 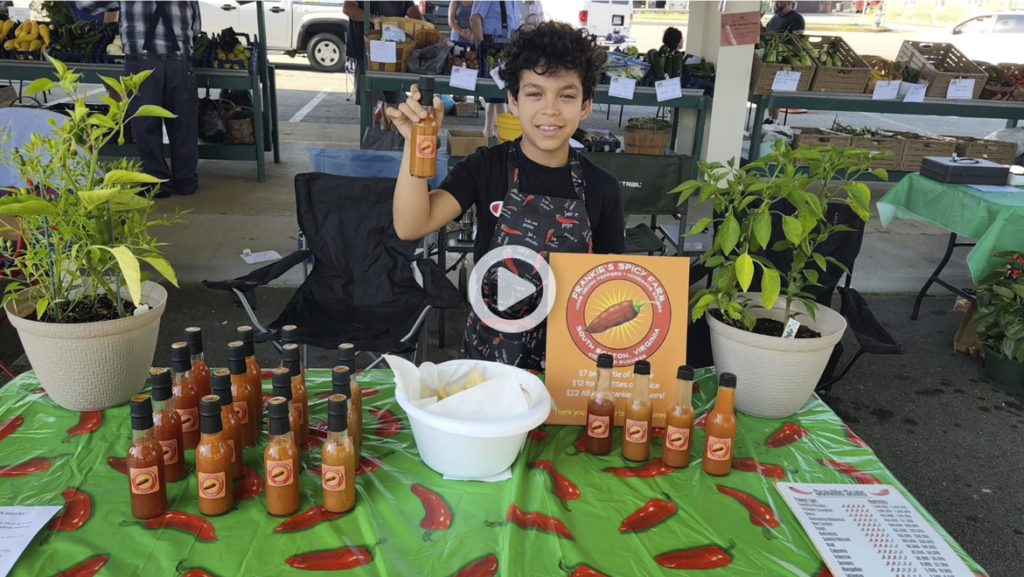 SOUTH BOSTON, Va. (WDBJ) – A nine-year-old in Halifax County has his own business that is really starting to fire up.

Dragon’s Breath, No A-C and Smooth Heat are just three of the hot sauces you can get from Frankie’s Spicy Farm.

Frankie Martinez created the brand in 2021. His burning passion for hot sauce began by accident.

“I suffer from seizures, so I was in a hospital at that point,” said Frankie Martinez. “Me and my dad ordered some fries, but they forgot the ketchup.”

His dad went back to get ketchup but accidentally brought him back hot sauce instead.

“When I tried it, my mouth was burning because it was my first time ever trying it. So, from there I was like, hot sauce is not that bad. I kind of wanted to try and create my own business,” added Martinez.

Martinez’s hope is that more kids will start to like hot sauce after trying his.

He has five hot sauce flavors. “Kids Play” is the mildest, while “Blowtorch” is the hottest. He came up with the name for his hottest hot sauce with the help of some of his customers at the Halifax Pizza Festival.

“We came up with the fifth, which actually sold out. We actually had no name for it. So, we had our people vote for it and ‘Blowtorch’ won. So that’s going to be our newest hot sauce,” said Martinez.

While sometimes the names of his products come from the community, the ingredients are sourced right out of Martinez’s backyard. There, you’ll find the spices and peppers he uses to create his fiery sauces.

“We just plant the pepper seeds and water them every day until they grow. Then, we get the peppers, dehydrate them, then we cook them and add new recipes,” explained Martinez.

He gets some help from his parents in the kitchen, but the recipes themselves are created as he goes.

“I mostly come up with them. My mom mostly does the cooking because I’m not old enough to do all the cooking. Sometimes I’ll say, ‘oh, I think it has too much onions,’ or ‘it needs to be a little spice here.’ So, I tell her what to do. She’s my manager kind of,” added Martinez.

The young entrepreneur is blazing through school, having already skipped two grades. He is also in the CO.STARTERS Generator program which is helping him jumpstart his business.

Frankie’s Spicy Farm hot sauces can be pre-ordered through his Facebook Page.