On Wednesday, October 28, 2020, Mid-Atlantic Broadband (MBC) hosted U.S. Senator Mark Warner (D-VA) to discuss MBC’s 1,900-mile fiber optic network, plans for expansion, and other economic development programs MBC is involved with in the Southern Virginia region. “If there is one thing we’ve all learned from COVID, it is that broadband connectivity is not a ‘nice to have’, it is an absolute necessity,” said Senator Warner. 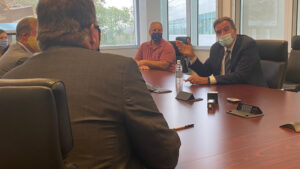 When MBC was formed in 2004, Warner (then Governor of Virginia) helped MBC negotiate a unique public-private partnership resource sharing agreement with the Virginia Department of Transportation (VDOT) that allowed MBC use of state-owned rights of way in exchange for installing fiber along those routes. A year later, in 2005, Warner helped kick off construction in Appomattox County and signed a map showing the first proposed routes of the MBC network. 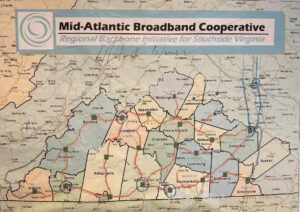 Tad Deriso, President and CEO of MBC, described how, after the initial years of grant funding for capital investments from the U.S. Department of Commerce Economic Development Administration and the Virginia Tobacco Region Revitalization Commission, MBC has operated in a financially sustainable manner. One of MBC’s key growth strategies is to expand network reach through mutually beneficial partnerships with local, regional, and national Internet Service Providers, content providers, and other fiber optic network operators.

Deriso also discussed how the MBC network is enabling last-mile connections to the home through partnering on projects like Microsoft Electric Cooperative’s EMPOWER network and Central Virginia Services’ Firefly Broadband.  Halifax County Administrator Scott Simpson, P.E., who was also in attendance at the meeting, shared that MBC’s network has been vital component of last-mile expansion in Halifax County.

MBC also updated Senator Warner on the SOVA Innovation Hub, a 501(c)3 non-profit created in early 2020 with investments from MBC and Microsoft TechSpark.  Lauren Mathena, Director of Economic Development and Community Engagement for MBC explained that Southern Virginia is one of seven regions in North America selected to participate in TechSpark, a Microsoft civic program that fosters job creation and economic opportunity.

Mathena described how the SOVA Innovation Hub will spark economic transformation in Southern Virginia through its programs, which focus on digital skills and entrepreneurship, and its facility, which is the first new construction in downtown South Boston in over 40 years. Set to open in January 2021, the 15,000 square foot state-of-the-art facility will be the new home of MBC corporate offices and will be the headquarters of TechSpark Southern Virginia. The first floor includes a coworking space, training classroom, and a first-of-its-kind Microsoft Experience Center. The Microsoft Experience Center will be a place to showcase cutting–edge digital applications related to local industries like agriculture, manufacturing, and healthcare. Programs will focus on digital skills.

Mathena gave an overview of the variety of programming initiatives in development for the SOVA Innovation Hub, including a partnership with CodeVA, a non-profit with a mission to bring equitable computer science education to Virginia students. Through the SOVA Innovation Hub, CodeVA will create and develop educational programming for the newly formed Computer Science Teachers Association Southern Virginia (CSTA SOVA) Chapter.

Since its founding, MBC has been a proponent of the economic advancement of Southern Virginia. Along with broadband expansion, MBC’s mission is to reinvest in the communities it serves.

When Senator Warner signed the map in 2005, MBC was just starting its journey. This visit, Senator Warner signed a map with “Congrats you’ve come a long way!” – a map that shows the now nearly 2,000 miles of MBC open-access middle mile fiber network that is making critical connections throughout Southern Virginia.